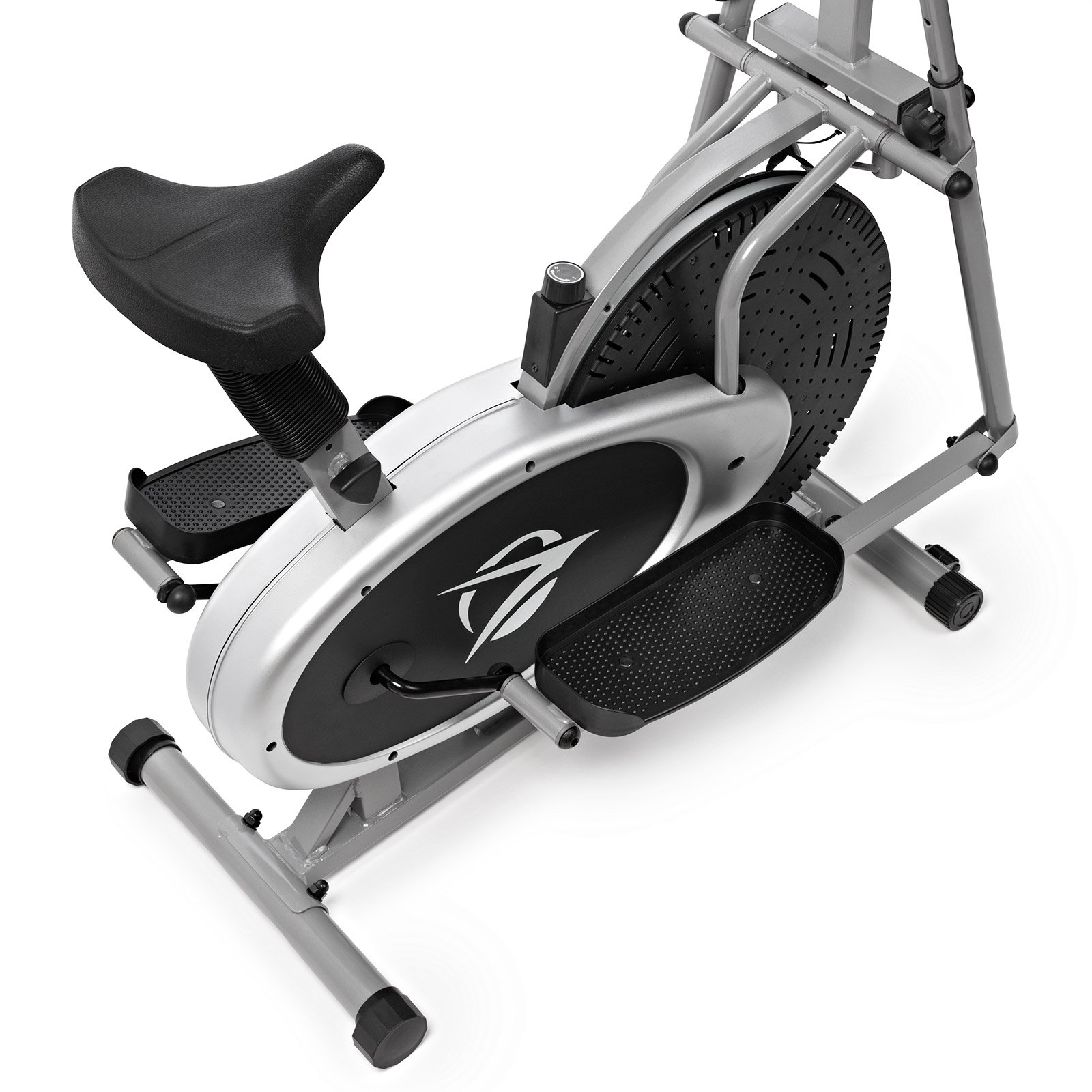 Stationary exercise bikes have been around for a long time. The early noticeable ancestor called “the Gymnasticon” was invented by Francis Lowndes in 1796. This early piece of equipment is often referred to as the basis for the stationary bikes that followed. It was made for orthopedic purposes to help people with physical diseases or injuries with their recovery.

The modern concept of the exercise bike or stationary bike came into being around the late 1960s  and then this concept developed on to what we see today. The most commercially recognized exercise bike is probably the Spin bike. The reason it’s called a “Spin” bike is that the first manufacturers of the Spin bike i.e. Madd Dogg Athletics chose to name it so. They trademarked the terms ‘Spin’, ‘Spinning’, and ‘Spinners’. In fact, back in 2017, they were involved in a lawsuit with NYC Holding because of this trademark. The opposing side was trying to use ‘SPNERGY’ as their trademark and Madd Dogg, Inc. won the lawsuit.

The spin bike came in long after the normal upright exercise bikes hit the market. Spin bikes just seem to have enjoyed more commercial success than the normal upright and recumbent exercise bike. Currently, it is fair to say that the majority of the Spin bike’s fandom is based around interactive console-based workouts with live classes and pristine trainers/ motivators involvement on a daily basis.

The first two are the classics: the upright and the recumbent exercise bikes. The third is the Spin bike while the fourth is either somewhat of a mix between a classic (upright or recumbent) exercise bike and an elliptical or a mix of the classic exercise bike with some other mechanism to exercise the upper body. This is why the fourth type is also called the “Dual-Action Exercise bike”

So let’s start with the classic. The first modern exercise bike or in fact the first acclaimed piece of electronic exercise equipment is the ‘Lifecycle’ by the manufacturers currently known as ‘Life Fitness’. It was invented by a chemist named Dr. Keene Dimick “who was driven to the invention by his desire to improve the effectiveness of his exercise routine.” This rudimentary stationary bike quite clearly resembles the model for the modern upright exercise bike. It had multiple feedback meters to measure a number of things just like the up-to-date exercise bikes measure exercise output in terms of energy (usually Kcal or watts), distance traveled and speed, etc. Now, exercise bikes can have magnetic or electromagnetic resistance which makes them a lot quieter and smoother though some bikes do still use friction pads for resistance. Resistance levels can be changed on most bikes and this is probably the main reason exercise bikes are so versatile.

You might also want to check out our in-depth guide on the best upright exercise bike.

Today, the classic upright exercise bike’s purposes range from weight loss and physical therapy to strength building and endurance. They’re solid machines that have evolved with the test of time and have had some pretty neat adjustments. They have digital meters to goal track any relevant information including calorie consumption, distance traveled, time exercised, the extent to which a goal has been reached, and even heart rates by linking the bikes to relevant devices and apps.

Recumbent exercise bikes came out around the same time as the upright exercise bike. They were meant for an increased quality of comfort and leisure. You could pedal while sitting in a comfortable chair reading a book or using your phone potentially for hours.

Check out our in-depth guide on the best recumbent exercise bike.

The design for the spin bike is supposed to have been based on a racing bike. That makes sense when you take into account the fact that the idea for the spin bike came from an endurance racer. This came after he got into an accident with a car at night while he was out biking to train for an upcoming event. These days professional racers have the option of riding an actual racing bike indoors with training pads or rollers so spin bikes currently aren’t a necessity for racing professional but the idea of the spin bike went on to grow into the basis for the international interactive intense biking platforms like Peleton. Nowadays, spin bikes are mostly advertised as the bikes that manufacturers like Peleton feature in their interactive console-based group training sessions. They’ve gained a cult-like following and have subscribers across multiple borders.

Spin bikes were created to provide a closer experience to real-life race biking. You can tell by the lean-on posture of the rider and the design of the drivetrain which closely resembles (if not identical) to a racing bike. Spin bikes provide an intense and high-impact workout. Their design helps users to integrate into the virtual race-biking experience as they ride through scenic areas, race other riders, or just workout with live training classes.

Dual-action bikes are usually somewhat of a mix between an exercise bike and an elliptical. Other combinations are also available, for example; bikes that provide the posture of a recumbent bike with arm rotators on top in place of the handles for you to exercise your arms while you recline in a comfy chair. Some may argue that it’s not true to the spirit of what an exercise bike is. But what it is, is convenient.

The purpose of this type of exercise bike is right there in the name, ‘DUAL action’. It can engage both parts of your body so that you don’t require any extra equipment for your upper body after having worked on the lower body. It’s possible to even work both parts of the body simultaneously on some bikes.

The biggest bargaining chip that stationary bikes have is that you don’t have to go anywhere, the whole point of inventing the stationary exercise bike was that you can stay at home and still get the same quality workout that you may get at the gym. The interactive multi-player or group training platforms push the indoor exercise platform further and make it easier for users to still feel connected even if they aren’t physically around each other. Such convenience can make the exercise bike preferable over other pieces of exercise equipment.

Another factor that adds to the comfort and the convenience of exercise bikes at home is getting to decide your own terms and not having to be pushed farther than you want to be pushed by a trainer\ motivator. You can have your own calorie consumption goals and don’t have to ignore anything that demands immediate attention during the workout.

And if you do want the gym experience, live classes are extensively available across many apps. Though some platforms may provide recorded classes for free, others require a subscription in order to access live interactive classes and you can think of the payment as the alternative to a gym membership. Leadings platforms provide up to 14 live classes a day with added on-demand content availability. A number of prominent apps also have recorded classes for exercises besides cycling like Pilates, Zumba, Yoga, Core exercises, etc.

As mentioned before exercise bikes can be used for a number of goals like weight loss and endurance build-up. Most exercise bikes come with the option to change the resistance levels which makes it possible for different people to have different options when it comes to their workouts.

Exercise bikes also provide people with the option of selecting different postures according to their condition. For example, if a person has some orthopedic problem in their knees or their back they can use recumbent exercise bikes for physical therapy purposes rather than having to go with the more intense workout on the spin bike or the upright exercise bike. This proves highly convenient for people recovering from injuries or people that have pre-existing physical conditions.

Note: It’s supposed to take the average person 3500 Kcal or ‘calories’ worth of workout to lose a single pound. With the provided statistics, users can lose up to 2 lbs. per week if they follow an hour per day workout routine of moderate intensity. If you follow a HIIT routine, you’re likely to see success sooner than if you keep a moderate-intensity workout routine going.

Every stationary exercise equipment takes up space, some more than others. Exercise bikes take up less amount of floor space than some other pieces of cardio workout equipment like treadmills. The average area taken up by an exercise bike is 4 feet long and 2 feet wide at the face of a bike. People now all also have the option to purchase foldable exercise bikes as well as bikes that have wheel attachments to move the bikes. This provides consumers with the additional option to remove the bike from where they workout after they are done.

Even in the non-foldable versions, the bikes don’t usually look bad. They’re sturdy, compact, and lean so they shouldn’t attractive negative feedback from observers.

Currently, the average price of a good exercise bike can range from anywhere between 900-1800$s with a few exceptions.

Top-of-the-line spin bikes, however, specifically from big manufacturers like Peleton and Echelon’s newer models can cost higher than what the average exercise bike costs. But the increased price should balance out with the added features of the product. The good news, however, is that you don’t need to purchase a high-end spin bike to have satisfactory indoor biking experience, a very suitable substitute could be to get a mid-tier bike with a tablet holder or one that can connect with tablets and phones and using the two devices i.e. the bike and the tablet/ phone together to get the most out of spinning or exercise biking experience.

As for recumbent and upright exercise bikes, consumers shouldn’t have to go too high to get a good and comfortable machine. It is worth mentioning however that some types of exercise bikes cost more than others based on the type of resistance that may be using. For example, premium bikes that use air resistance generally cost considerably higher than the ones that may be using magnetic or electromagnetic types of resistance mechanisms.

So the general everyday consumer should be able to get an exercise bike for a reasonable price but depending on how high tech and high quality you want to go, prices can change considerably.